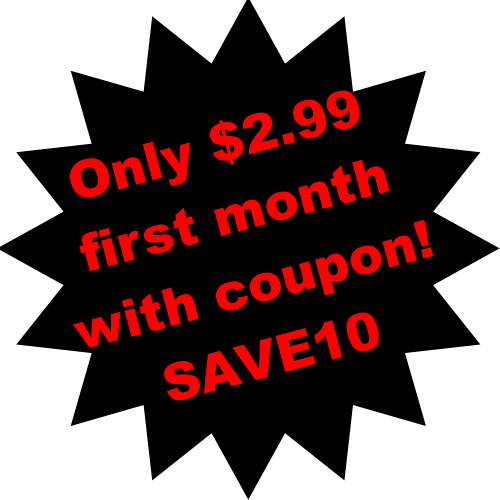 You are here: Home

Qigong is an ancient practice of cultivating energy within the body. It is based on the idea that we have energy flowing through our bodies all the time. This energy, called Qi, is supplied to every cell in our bodies so that our bodies can do what they are supposed to do. Like electricity supplied to a factory. If the factory gets the electricity, it can make the products it's supposed to make. Qi literally means energy and Gong means something that takes time and effort. When you put the two words together you get something that roughly means you are cultivating energy.

The goal of an individual studying Qigong is to learn to sense the energy, develop it, and control it. Like learning to play chess, only a few moments are required to learn the basic principles and yet it takes a lifetime to master. As the student learns more, further subtleties can be perceived, allowing understanding to deepen and broaden.

Qigong is accessible to people of all ages and abilities. Different styles of it can be done sitting, standing, or lying down and many health benefits can be achieved with just a few minutes of practice every day.

Qigong exercises involve movements, breathing and visualizations to cultivate the body's energy. For Qigong meditation, the body is usually sitting still and the practitioner incorporates visualization and breathing to move and store the energy. In Qigong Massage, physical massage techniques are used on the body to cultivate the energy in the body, not just to relax the tension in the muscles. Qigong Healing incorporates visualization and physical techniques to improve the energy flow inside the body and can be done on oneself or a partner.

Many people who are unfamiliar with Qi think of it as mystical or imaginary but it is neither. Qi is part of everything around us and every cell of our body. It's as real as your physical body or the air that you breathe. We can't see the air but we feel it's pressure when it moves. Most people can't see Qi but with out any training at all many people can feel it.

You can do a little sensitivity building exercise right now to develop the ability to sense the Qi. Place your palms facing each other and relax your shoulders. Take a breath and let it go. As you inhale slowly move the palms away from each other. As you exhale bring them back towards each other without touching. Inhale as the hands separate, exhale back. Inhale apart, exhale together. Inhale and exhale. Now inhale as they separate, and as you exhale, this time slowly bring the hands closer and closer together and notice any sensations you might feel in your hands. Can you feel any sensations, tingling, pressure, magnetic feeling, vibration? 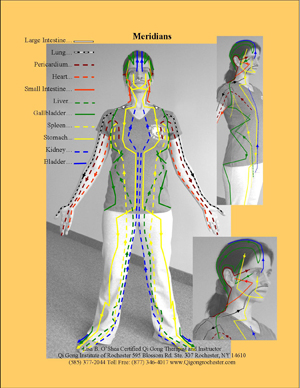 The energy that flows through your body is supplied through major pathways called meridians. There are twelve pairs of meridians associated with the twelve major organs in Chinese Medicine. The meridians are symmetric on each side of the body. Each of these meridians is connected internally to the organs and branches out through the whole body into smaller and smaller channels to supply the energy to each individual cell and to allow energy to balance with the environment. We get into trouble when this energy flow gets interrupted, and our bodies can be affected physically, mentally, emotionally, and spiritually.

When something interferes with the energy flow it is called a blockage. These blockages can be caused by external environmental effects like bad posture, physical trauma to the body, pollutants or by internal environmental effects such as emotional or mental stress. Whether the cause was external or internal, the result is the tissues of the body now have an area that has poor circulation. In either case, Qigong is a method for removing these blockages and improving the energy circulation and supply to the cells of the body.

You can think of this situation like a rock that rolls into a stream. When the rock rolls into the stream, the water will deviate and flow around the rock. The rock is then causing some areas to not get enough water and others to get more than it should. Removing the rock is necessary to return the flow of water to its original path but it is not enough by itself. If the water has been deviating for a while, it will have worn deep groves in the earth and not easily be shifted back to its original path. The goal of Qigong is to both remove the rocks or blockages and retrain the energy to flow along its original proper path. 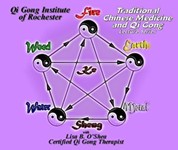 If we had a way to analyzing the body's energy flow, we could determine where these blockages were and remove them to help the body to heal itself. Traditional Chinese Medicine or TCM is a very useful method for analyzing the body's energy. Chinese Medicine developed right alongside of Chinese culture and has a history of over 5000 years. It involves perceiving the body as a network of interdependent energy systems called organ systems or elements And, that is the big defining difference between TCM and Western medicine.

For example, if a person had chest pain, they would very likely want to see a cardiologist to find out what was wrong. That's probably a good idea. The doctor might take a EKG to analyze the electric flow through the heart, he might run test so see how the blood was flowing through it, he might order blood work or ultrasound to see if there had been any damage to the heart muscle itself. The doctor might recommend treatments such as medication or surgery.

Chinese medicine does not ignore the importance of that kind of treatment. But, that is not enough to help everyone. Many people already receive these kinds of treatments and it might slow the progression of heart disease for some, but it often doesn't stop the progression. Sometimes the western interventions cause other kinds of problems that weren't there before.

TCM looks at the same kind of problem in a different light. The energy that flows through a person's chest can relate to other areas of the body. In fact, TCM considers that all the flow of energy is affected by the whole body. This is called the Five Elements Theory. In the 5 elements theory, no organ system stands alone, they are all interconnected.

With Chinese Medicine you could not have just a heart problem. The whole body has to be taken into account. For example, often with energy blockages in the heart, the energy flow of the liver is impaired, sometimes the kidney energy. You have to take a look at the whole body. If the flow of energy is interrupted in one place, it will affect the flow of energy in other places.

Like looking at a corn field. You can see if the corn is all the same height. If it's not, do you think something was wrong with the seed that was planted. That is looking at it from a western medicine model, the cells have something wrong with them. But, we know that corn growth is affected by how much water it gets too. Is there a problem with too much water in one place, or not enough? That's looking at it from a TCM point of view. There is energy being supplied to the body just like water is supplied to the corn field... is there something wrong with the flow?

Neither TCM nor western medicine is a perfect system by itself, but using them together makes them both more effective.